A Report on Botnets

The Power of Zero

The aspect of zero has been applied by many policymakers to standardize their policies. However, the applicability of zero approaches to eliminate botnets is next to impossible, but the use of this approach as the mirror is likely to reduce the botnet rate in the country and globally. Council Special Report (2018) explains that applying the power of zero to botnets in the United States will reduce the infection rate to effectively zero.

Don't use plagiarized sources. Get Your Custom Essay on
A Report on Botnets
Just from $13/Page
Order Essay

The State of Botnets

The infection of botnet varies from one location to another where developing countries are recording high rates, undeveloped records low rates, and developed countries have recorded low and improving rates of infection. The United States is presenting a good rating in terms of per capita and is at position 8 in terms of the cleanest networks among Economic Cooperation and Development (OECD) countries. The low rate of botnets in the US may be due to the availability of antivirus software in the country, and low rates of unsupported and pirated software. In comparison, China has the highest number of botnets irrespective of the antivirus software in the country. Nonetheless, China is well known to use pirated and unsupported software.

The rate of botnet attacks is increasing globally. In 2018, the identified and blocked malware botnet controllers (C&C) were 10,263 and were located in 1,121 varying networks. Ermine (2018) explains the number increased from 2017 by 8%. The botnet in 2018 in terms of the Spamhaus Block List (SBL) was recorded at 25% which is more than the 2017 records of 15% SBL listings. This led to a 67% increase of botnets in SBL which is an indication that cyberattacks are changing from phishing to stealing passwords and other credentials (Spamhaus, 2019). The geographical rank of the botnet is illustrated in the image below. 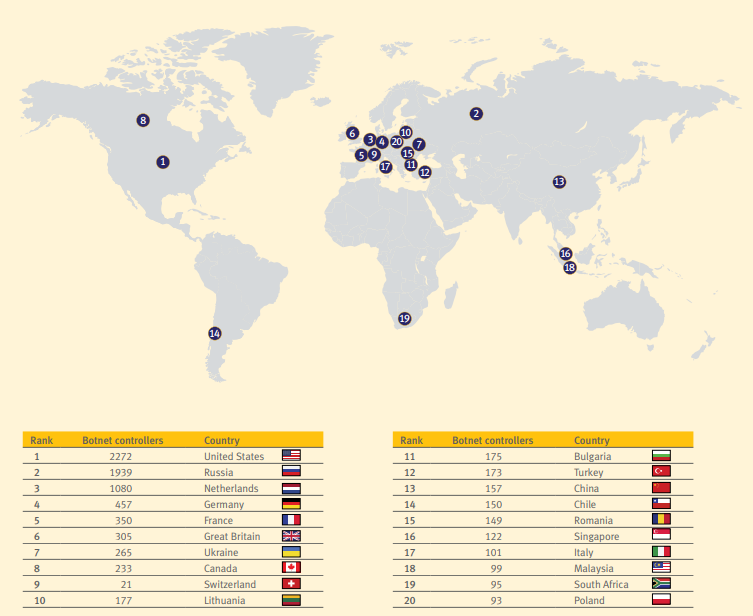 The Persistence of Botnet

Irrespective of the aim to eliminate the issue of the botnet, the number of botnet infection in the world continues to grow. Previously, botnet strategies put more focus on destroying the C&C, ISP notifications to users of infected systems or rather enforced law to the botmasters. Such strategies are what led to the introduction of the Anti-Bot Code of Conduct where consumers were trained botnets, ways to detect the malware, the notification systems and strategies to remediate the infection (Council Special Report, 2018). This was followed by the introduction of Operation Clean Slate, which reduced and eliminated botnets threatening the US economy. Nonetheless, the strategies have not effectively reduced the issue of a botnet which calls for a more comprehensive approach by tackling the policy and economics issues; organizational, operational and process issues; and existing and new technologies (IBM Security, 2018).

The first strategy that the country requires to employ is formulating a global goal that is standardized to measure every state against it. The formulation of such goals requires collaboration between the executives of global businesses, civil society, and political leaders. The second strategy is formulating a principle where all states will be responsible for harms resulting from botnets. The lack of proactiveness of one state should not affect other stats and thus every state should remain proactive. The last strategy is attracting international action and collaboration by empowering other states.

The impact of botnets I the world continues to increase. The challenge will continue to increase as more devices are entering the internet world. Also, the aspect and the innovations of botnets are challenging to eliminate through the use of the zero power approach. However, the United States remains one of the cleanest countries and should formulate recommendations stated above to reduce the infection rate of botnets.

Ermine, A. (2018). Bots and botnets in 2018 Statistics on botnet attacks on clients of organizations. Securelist. Retrieved from https://securelist.com/bots-and-botnets-in-2018/90091/