The grades.save data set provides the details of student’s final score and grade in a particular unit or course which are hypothesized to be influenced by a wide number of factors. For instance some of the factors that are hypothesized to influence final grade include the gender, ethnicity, the current year of study, section, the current Grade Point Average (GPA) and scores for five quizzes. For this analysis, the specified variables are gender and GPA. The researcher aims to investigate if particularly if the mean GPA is different between the two genders; males and females. Gender influences the GPA score for students and existing literature has found a significant difference between the GPA for males and females of the same age subjected to the same learning environment (Kim, 2002).

Consequently, this may be explained from the biological functioning of the human body that affects the level of cognitive abilities between males and females (Kim, 2002). Therefore, Gender is treated as the independent (explanatory or predictor) variable while GPA is influenced by masculinity of femininity (gender) of a student, hence the dependent variable (outcome). GPA is measured under a ratio scale while gender is assessed as a categorical (nominal) scale. The sample size for the distribution is given as 105 students (n=105) as revealed by the data view tab of the SPSS file provided.

Assumptions of the T-test

The T-test assesses whether two groups have a statistical difference in their means. The T-test analysis assumes that the dependent variable should be measured under ratio or interval scale indicating that it should be continuous. Another assumption is that the data should be independent (not related or correlated) especially for a one-sample T-test. Such an aspect indicates that the data should not have any relationship between their observations. Additionally, the distribution is assumed to have no outliers and lastly, the dependent variable (GPA in this case) should follow a normal distribution – and the normality can be tested using Shapiro-Wilk test for normality.

GPA Histogram showing the normal curve for the distribution

From the above histogram, it is clear that the GPA follows a normal distribution with a mean of 2.78 and a standard deviation of 0.764, given that n = 105. Clearly, it can be seen that most scores lie within the group mean a key aspect that indicates a normal distribution and no skewness is observed. When a histogram of the standardized scores  is plotted, similar results are observed.

Histogram for standardized scores for GPA showing a normal curve 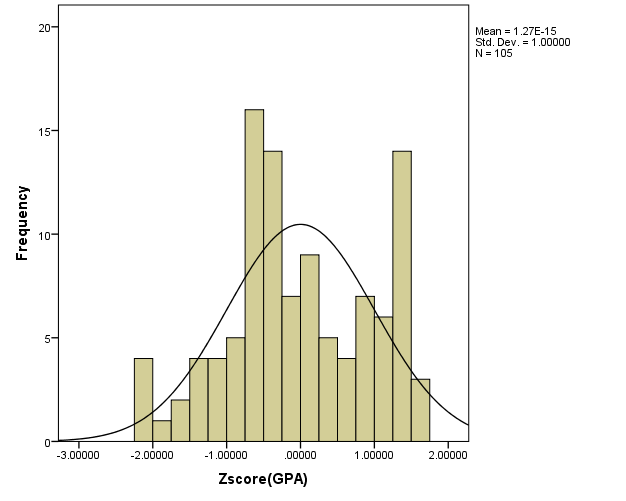 Given he sample size of 105 students, the mean GPA is identified as 2.78 with a skewness of – 0.052 and a Kurtosis of -0.811. Skewness identifies the symmetry of data within a distribution and symmetrical data has a skewness of zero. However, due to violations of a normal distribution, the skewness for a normal data can oscillate within the band of +/- 1. Therefore, a skewness value of -0.052 identifies that the data is normally distributed. On the other hand, Kurtosis quantifies if shape of the distribution matches that of the Gaussian distribution that always have a Kurtosis of zero. However, due to violations of normality

Shapiro-Wilk test utilizes the null-hypothesis principle to identify if a sample is drawn from a population that is normally-distributed. For the test above, the P-value = 0.010 which is greater than alpha 0.05 indicating that the null hypothesis (the data is from a normal distribution) is retained (P-value = 0.010 > 0.05) (Field, 2009).

The Levene’s test assesses if population variances are equal – homogeneity of variance. It is clear that the P-value is greater than 0.05 (alpha) hence the null hypothesis is rejected and concluded that there is a difference between the group variances. The variance of GPA between males and female students is different.

Summary of assumptions of T-test

From the above tests and analyses, the assumptions of T-test are met. First, the dependent   variable GPA is a continuous variable measured under a ratio scale. The distribution is normal based on the kurtosis and skewness tests. The Shapiro-Wilk Test also confirms the normality of the distribution of the sample. Additionally, the Levene’s test confirms that there is an independent between the two groups – indicating that the T-test assumptions are met.

Stated as the research question is:

Is there any difference in GPA based on gender?

H1: GPA does not vary with Gender

The T-test analysis would adopt an alpha of 0.05 indicating that the confidence level would be 95%. Given 95% confidence level, does GPA vary with Gender? Therefore, the rejection region would be 0.05.

Given the above analysis, the t-values are given as 37.280 (GPA) and 29.066 (Gender) with 104 degree of freedom. On the other hand, the P-value for the analysis of both Gender and GPA is seen to be 0.000 which is less than alpha (0.05). Therefore, the null hypothesis that GPA varies with Gender should be rejected and conclude that GPA does not vary with gender of the student. For GPA, the group mean is 2.78 and that f Gender is 1.39. Using the group means and standard deviation and the Cohen’s d statistic the effect size is 2.1597 indicating a huge difference of the variance between the two groups (Sawilowsky, 2009).

From the analysis, it is clear that any variance in GPA scored by the students varies with Gender. The one-sample T-test analysis is a powerful technique that adopts the P-value in rejecting the null hypothesis – it is simple to use and interpret as the alpha is compared with the observed P-value. Given that the T-test results indicate that there is significant variance of the group means – this implies that the sample does not come from a population with specific mean. Therefore, from this aspect, it may be concluded that the GPA is varying with gender of the student. The T-test statistics is limited to number of variables – when the independent variable exceeds two, T-test is not possible and a more appropriate technique is adopted (such as ANOVA) (Donley, 2012). Additionally, for dependent variables that are categorical or ordinal, T-test cannot be used, while they should be normally distributed though outliers may also be a challenge to the T-test analysis. Lastly, the researcher can manipulate the confidence level which may manipulate the statistical decision.